The latest round includes six new and eleven reimagined productions set to embark on over 230 new performances touring indoor and outdoor spaces and venues throughout Scotland’s villages, towns, cities, from summer 2022.

Scotland’s beaches will be the setting for the debut tour of Julia Taudevin’s powerful migration story, MOVE and new production, Alien Species from Dudendance.

The breath-taking choral drama inspired by ancient keening rituals, weaving storytelling, choral soundscape and Gaelic song, MOVE premiered to critical acclaim at this year’s Made in Scotland showcase at the Edinburgh Fringe Festival.

In an era where human waste is devastating the landscape, Alien Species will see plastic trash mutated into living beings as they evolve out of the sea and sand in this new highly visual site-specific performance from Dudendance in association with FERAL.

There's something for everyone as children and families can enjoy a raucous mix of songs and storytelling in the restaging of Rocket Post! by Lewis Hetherington and Ailie Cohen Puppet Maker about an eccentric German scientist who wants to bring the world together by launching a rocket full of letters from Scarp to Harris.

Puppetry, performance and play are at the heart of new work from Tortoise in a Nutshell. Ginger tells the tale of a misshapen gingerbread person, marked for the bin. The multi-sensory performance will take 3-7yr olds and their families on an anarchic adventure creating moments of joy-filled connectivity and imaginative escape.

Wonder Fools’ 549:Scots of the Spanish Civil War will take to the stage recounting the true stories of four working class miners from Prestonpans who went to fight as part of the International Brigades.

After the roaring success of Spuds tour last year, Sleeping Warrior Theatre Company will be hitting the road with two musicals. Crocodile Rock, a one-man musical about finding yourself and coming out, and A New Life - a musical about the challenges of motherhood.

“Thanks to National Lottery players, a selection of Scotland’s most luminary artists and performers will bring enlightening and spellbinding productions to new audiences and fans alike.

“Using an array of locations to give audiences more choice, the magic of theatre will be enjoyed both inside and outside the theatres which have been the pillars of their communities, despite the challenge of the past year.”

For further information on each production please download the following document.

A selection of images is available for download here: https://we.tl/t-nhkzTXee4E

Creative Scotland is the public body that supports the arts, screen and creative industries across all parts of Scotland on behalf of everyone who lives, works or visits here. We distribute funding provided by the Scottish Government and The National Lottery. www.creativescotland.com 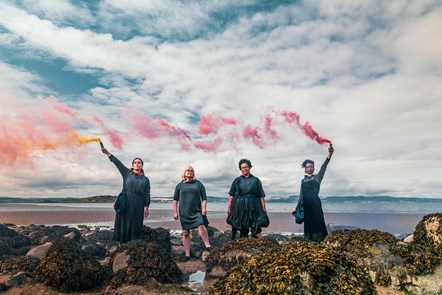