“A further £25 million will support the culture sector through the second round of the Performing Arts Venue Relief Fund and the Culture Organisations and Venues Recovery Fund.  This will be targeted at those who previously received support from these funds and those who were eligible but did not get support.”

“We welcome confirmation today from the Scottish Government of £25m in additional emergency funding to help cultural organisations in Scotland address the challenges they are facing due to the ongoing Covid-19 pandemic.

“We are now working to finalise the details of this funding, which will be offered as a further iteration of the Performing Arts Venues Recovery Fund and the Culture Organisations and Venues Relief Fund, and further details on eligibility and how to apply will be announced later next week.”

Creative Scotland is the public body that supports the arts, screen and creative industries across all parts of Scotland on behalf of everyone who lives, works or visits here. We distribute funding provided by the Scottish Government and The National Lottery. Further information at creativescotland.com. Follow us on Twitter, Facebook and Instagram. 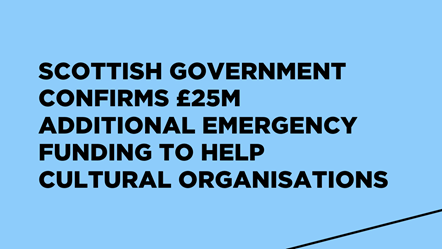